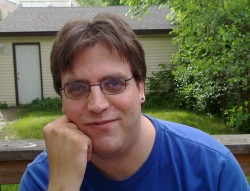 A wild Dave appears! Dave is the Twin Cities Veg Fest Committee Chair – which, as best I can tell, is a fancy way of saying taskmaster. I sat down as Dave “shared” some insight into his personal life and the tremendous (no, seriously!) work behind planning a Veg Fest.

TCVF: Hey Dave! Nice to see you. So, let’s start with the easy stuff. How did you get involved in planning the Veg Fest?
Dave: I’ve been involved with CAA since we were founded in 1998. I like event planning, and doing a festival was something I’d been talking about for at least 8-10 years or so. So when we decided to do it I had to put my volunteer time where my mouth was.

TCVF: What does volunteer time taste like? Nevermind. So what have you enjoyed most so far?
Dave: This year has just been a little easier in almost every way compared to last year. Now that we’ve done it once we have a much better sense of how it all works. Also, having a track record of success has made it much easier to recruit sponsors and exhibitors. Last year it was sometimes a bit of a struggle to convince businesses that it was worth their time, especially those we wanted to be food vendors. This year we actually had too many food vendor applications! That’s a nice change.

TCVF: I bet! What are you most looking forward to at this year’s Veg Fest?
Dave: I’m all about the food. I absolutely love Asasa Yaa’s food and since the restaurant closed many years ago this is one of my few chances to have some. We also have a lot of other delicious food to try, like Theo Chocolate, waffles from Kitty Corner Cafe, and lots of others.

I’m also excited about the concert. I think this adds a lot to the event and I’m hoping I have a chance during the day to catch at least part of one performance.

TCVF: What do you enjoy doing in your free time? This is a trick question, you shouldn’t have any free time.
Dave: Unlike all the other interviewees I’ve seen so far, I’m not much of an outdoors person. I’m very much a stereotypical geek. I like reading, watching things on Netflix, playing video games, and programming. I also like spending time with my lovely wife.

TCVF: Who or what species is your favorite animal?
Dave: I grew up with cats so even though I’m violently allergic to them I still love playing with them. I also love pigs because they’re just so friendly.

TCVF: Do you have a favorite recipe you can share?
Dave: I’ve been lazy recently and not cooking too much, but I do like baking from time to time. I’ve been making a veganized version of the original Tollhouse recipe for chocolate chip cookies that I think comes out really well.

TCVF: What’s rockin’ your world this month?
Dave: Vo’s Vietnamese Restaurant just re-opened in south Minneapolis. This place was open in Northeast from the 90s through 2003 or so. The food is amazing, and it’s where I was married to my wife. I’m thrilled that it’s back.

We’re thrilled too! And we’re also thrilled you agreed to this interview (I mean it!) Thanks Dave! We’ll be back with more titillating volunteer stories when Twin Cities Veg Fest Volunteers – A Love Story returns.