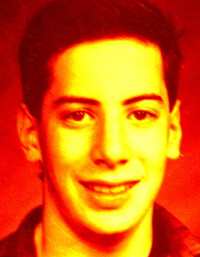 I’m pleased to have worked with Carole and Stan Feldman to present the Twin Cities Veg Fest concert in memory of Kenny Feldman. Kenny was a close friend of mine and was instrumental in my being where I am today. We lost him to suicide 14 years ago.

I met Kenny as soon as I started college. Kenny was an avid reader, intensely curious, a lover of music, and was an irreverent skeptic. Knowing him became an opportunity for me to learn and grow.

During our second year of college, we were living together and he started volunteering with the Minnesota Public Interest Research Group (MPIRG), an environmental and social justice organization. He spoke enthusiastically about what they were doing and the people he met. I decided I would get involved, too, and followed his lead – to my first MPIRG meeting. I got involved, and by the fall I started to see that organizing for social change was meaningful for me. Through MPIRG, I met an animal activist and became involved in animal advocacy. A year later, I co-founded Compassionate Action for Animals.

Kenny’s life was difficult. He suffered from depression much of his life and took his life in 1999. I’m grateful I was able to know him and that I was influenced by him. Shortly before he passed away, I told him how much he meant to me and how I appreciated the key role he played in getting me on the path I am on.

I hope this concert is a fitting tribute to his life. He was a lover of animals. He was close to his companions and was a vegetarian. Kenny loved music. He listened to an expansive variety of genres.

I loved the way that Kenny danced. He was always listening to music and going to concerts, but he rarely danced. He was shy about it; he didn’t think he danced well. He lived with muscular dystrophy, which made his movements unique — and better. He was wild and he was original, and this made him a beautiful and inspiring dancer. And it was these same qualities that led him to be a voice for those less fortunate.

I’ve stayed in touch with his parents, and with their support we’re doing the concert in Kenny’s memory. They want to keep his memory alive, and to remember him for the things he loved – animals and music. Kenny’s family misses him every day and is honored to support CAA, an organization that so closely aligns with his deeply held value of compassion.

If you, or a loved one, are struggling with depression, please go to the Suicide Awareness Voices of Education (SAVE) website for more information on how you can help or get help.

Unny is a co-founder and the Executive Director of Compassionate Action for Animals. Please see his biography.
View all posts by Unny Nambudiripad →